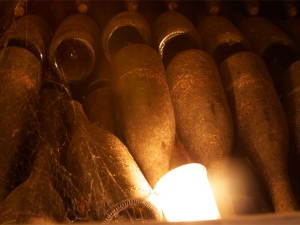 Kevin Kelley’s interest in wine began before he was legally permitted to drink it. An early affection for history lead to study at UC Davis in Viticulture and Enology, during which time he approached a visiting professor from Dijon about working in Burgundy. Soon after receiving his diploma, Kevin began his internship at Domaine Meo-Camuzet in Vosne-Romainée while living with Christian Gouges of Domaine Henri-Gouges. If Davis provided the canvas, Burgundy offered the palette.

Upon return, Kevin became an assistant winemaker to Wells Guthrie at Copain, and then winemaker for Matt Licklider and Kevin O’Connor at Lioco. Salinia was founded soon thereafter in 2003.

If we had to suggest one virtue to describe Kevin’s process, it would be patience. Fermentations have on occasion taken over a year to complete, wines are kept in barrel far longer, and released only when Kevin deems them ready. That time may come within five years of harvest, and it may not. Picking early, skin contact, and lean wines purely expressive of terroir have become consistent threads throughout the fabric woven by Salinia.